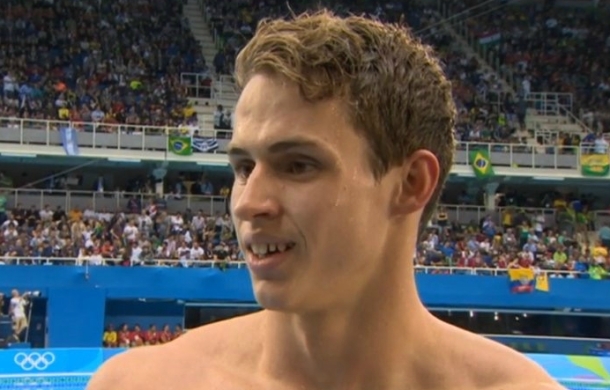 BEN PROUD broke the British 50m freestyle record twice within two hours on the way to winning the silver medal at the European Short Course Championships in Copenhagen of Friday.

The Plymouth Leander swimmer clocked 20.66 seconds in the final to finish second behind Russian Vladimir Morozov, who broke the championship record and was just 0.05 seconds off the world record with a 20.31 swim.

Proud had earlier clocked 20.70 in the semi-finals, which had lowered his own personal best and national record, which he set in 2015.

The 23-year-old’s swim in Denmark on Friday evening puts him inside the world’s all-time top 10 for the 50m short course freestyle rankings.

On Saturday, Proud will swim the 50m butterfly – an event where he is world long course champion.

The 16-year-old Italian international finished third in the men’s 200m butterfly with an impressive time of 1:58.61.

He was only beaten by Great Britain star James Guy and Poole’s Jacob Peters, who both swam under the Commonwealth Games qualifying time.

Burdisso then went and clocked 49.97 seconds to win the men’s B 100m freestyle final. That time would have been fastest enough for third in the A final. In the same race, Plymouth Leander’s Reece Dunn finished sixth in 51.19.

Leander’s Perry Gardner just missed out on a medal in the men’s 50m backstroke A final. He clocked 26.06 seconds to finish fourth.

Team-mate Laura Stephens was also close to winning another medal this time in the 50m butterfly final.

Having been on the podium in the 100m event, she finished fifth overall and fourth Brit in a time of 27.26 seconds.

Mount Kelly’s Niamh Robinson reached the B final of the 200m breaststroke where she clocked 2:39.28.