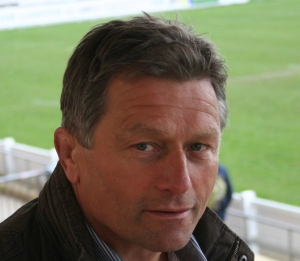 CORNWALL coach Graham Dawe will be on familiar territory on Tuesday night when his side take on Devon in the annual Tamar Cup.

This year’s clash between the two counties is taking place at Plymouth Albion’s Brickfields ground (7.45pm).

Dawe, who now combines his Duchy job with being Albion’s new director of rugby, will be hoping Cornwall can retain the Tamar Cup for a fourth successive year against his former county.

The former England hooker has achieved the rare feat of playing for both counties in County Championship finals and coaching them at Twickenham.

He helped Devon reach six finals between 2000 and 2008 before taking Cornwall to HQ last year.

The Duchy lost a thriller 36-26 to holders Lancashire, which was their second final defeat in two years.

Cornwall have not won the cup since 1999 and if they are going to do that this year they going to have to overcome tough trips to Gloucestershire and Kent and before hosting Hertfordshire at home.

Meanwhile, Devon’s priority is to try and get out of the second tier of county rugby.

They have struggled since their relegation in 2010 and the change in the rules that meant they could not select youngsters from Plymouth Albion or Exeter Chiefs.  They have not won a match in Division Two but there is optimism in the Green and White camp this year with so many of the region’s teams doing well.

Simon Morrell is their new coach and it is expected they will build their County Championship team around players from Taunton and Exmouth.

The Devon selectors opted not to select too many players from those two teams for Tuesday’s game as they had important matches at the weekend and they did not know if Taunton would be in a play-off game this Saturday or not.

Devon’s league fixtures this season sees them travel to Somerset on May 9 before entertaining North Midlands (May 16 at Brixham) and Surrey (May 23 at Okehampton).

Both Devon and Cornwall have named former Albion players in their squads for Tuesday’s game.

Dan Williams, who spent the 2013/14 season at Brickfields after spells with Gloucester and London Welsh, will start at flanker for Devon, who also include former Westcountry Warriors Dean Avery and Chey Bryce in their squad and Ivybridge’s Lewis Paterson at centre.

Paterson has swapped counties having played for Cornwall last year, but going the other way is Saltash’s former Albion full-back Max Venables, who is in the Duchy squad having previously turned out for Devon.

Rupert Freestone, Jamie Salter and Nielsen Webber, who have all previously pulled on an Albion shirt in a competitive match, are also named in the Cornwall squad.

Another Plymouth old-boy, Kyle Marriott, would have been included had he not been unavailable.

Admission into Brickfields on Tuesday is £10 for adults and £5 for concessions. Gates will be open from 5.30pm.